Mission 2: Factory on the Sea

After the cakewalk of Mission 1, we finally get into a semi-difficult mission to tackle.  Our Helios squadron, while searching for the Dominus, has been diverted to check out a well protected factory of some sort on a set of islands.  The Scenario is best described by the graphics and dialog below: 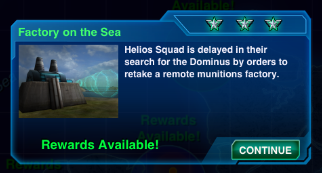 As you can see, this mission has some interesting twists in dialog.  Admiral Durant is emerging as a bit of an A-hole, but heh, that’s why he’s the admiral, right?   Copperhead is getting a little more lippy questioning orders, and Vargas, with her flowing red locks, expresses her concerns about killing civilians but then knows how to take an order and quickly gets on with her duty.


There are numerous targets in this mission:  ground cannons, missiles, fighters (again of the fragile variety), destroyers, and a triple redundant set of shield generators.  All of this takes place on a set of 4 islands that is actually a pretty impressive work of engineering.   Kudos to the Markovian rebel engineers and designers.

First objective is to take out one of the shield generators on one of the 3 small islands which will drop the electric shield temporarily on the main island.  I usually hit the one on the far left first.  It is a pretty easy task.  You have to take out a few ground cannons if you choose, and then take out the generator.  It doesn’t take too many shots.

Now comes the important part for this mission.  If you want to earn the bonus of 400 credits, you need to knock out 3 of the structures before the shields are reactivated.  Basically just make a beeline for the main island and fire away as shown below.  With standard issue missiles and cannon fire, you can pretty easily take out 3 of the structures and sometimes 4 – I’ve never tried using the more expensive missiles but imagine you might be able to get more – Maybe Bisnovats can take them all out on the first pass?  Curious if anyone has tried that.

After the shields reactivate, you need to repeat the process with the next 2 islands.  Island #2 has a couple destroyers protecting it and island #3 has some ground cannons and ground missiles but nothing too overwhelming.  Fighters also occasionally show up but all are just as lame as in mission 1 – one shot and their toast.   One strategy that I’ve found works on approaching the main island is to go to a very high altitude (3000 ft.).   The ground support doesn’t seem to react as well when you approach from a steep diving angle.

You get an extra bonus of cannon ammo if you destroy every single target on all 4 islands.  I’ve done this a few times but have gotten tired of it – it’s just too time consuming and not worth it for the cannon ammo, in my opinion.

I haven’t talked about the badges, but there are badges to be earned on these  missions –one is a “cone head” badge if you fly thru all of the shield generator radio cones. 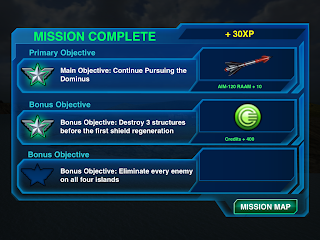 So…. as soon as you knock out the last structure on the main island, the mission is over.  You’ve taken out the factory and can resume your search for the Dominus.  Vargas sounds a bit melancholy when she says “I guess we’ve done our job here”.  Could it be that she has a premonition of something bad coming on the horizon of Mission 3!!!!
Posted by MetalStorm Forever! on Wednesday, January 25, 2012