Z2Live announced the winner of the Skin to Win contest this weekend.  Skins were submitted by MSWM players & the winner was based on which skin received the most "likes" on facebook.  The snake skin, by Immortal Grimreaper & named rattlefang, received the most likes at 861 votes compared to the SV offering which came in 2nd place at 780 votes.  If you follow the facebook discussion, there is plenty of discontent by the SV crowd on the winning plane with claims of voting fraud.  I don't know if there was suspicious behavior or not.  How can you tell if a "bot" is somehow giving you extra "likes" - does anybody know?   I will add that I actually voted for the snake skin myself along with the red/black design & tiger skin.  The SV offering of gray with red trim really did not look very original to me, but heh, what do I know.

Posted by MetalStorm Forever! on Sunday, September 30, 2012 46 comments: Links to this post

So how does MSWM rank in the App Store?

So how popular is MSWM in Apples App Store?  I decided to check into it.

MSWM has consistently been one of the best producing games in the app store as far as revenue.  It is currently the 115th most profitable app in the app store, which is pretty impressive.  I've checked a few times before and they have often been in the top 50 or higher.  Obviously there are many many players out there coughing up coins for new planes, upgrades and coin weapons.

As far as current download popularity, MSWM has slipped somewhat.  Currently ranked on the list at #247.  A lack of major upgrades over the past 9 months have caused an erosion of new players downloading  the game.  However, there does appear to be quite a bit of fan loyalty, with many of us continuing to play the game over a long period of time.

Rumor is that an android version is coming out soon.  Can anybody confirm that or point to a web site talking about it?  I've done some searches but have yet to find anything definite.

Overall it has been an impressive run for MSWM in the app store.  Hopefully Z2 can keep this game fresh and viable over the long haul.
Posted by MetalStorm Forever! on Thursday, September 27, 2012 27 comments: Links to this post

We have quite a colorful little red and white addition to the weapons class this week in addition to the Griffin.  Not sure if this is meant to resemble a candy cane or a barber poll, but maybe its stats make up for its looks:

Missile Tracking +7%:  Tied for 2nd in class behind Titan, Helix and Liberty (1% behind them)

Missile Reload +12:  Tied for 1st in class with the Hurricane.

Looks like we have a missile firing sharp shooter here similar to the Hurricane in many ways.  With 1st in class at missile reload and strong boosts in missile tracking and missile lock speed, the Arrow will be a strong missile fighter.  With no speed or agility boosts, on the other hand, it will be easy to circle behind.  However a strong 10% boost in armor helps offset a little of its poor maneuverability.  Overall a decent plane and an interesting addition.

The Arrow has been added to the Comparison Guide  and also to the Fleet at a Glance - check it out!
Posted by MetalStorm Forever! on Monday, September 24, 2012 27 comments: Links to this post

In Greek Mythology, the Griffin is a legendary animal with the body of a lion and the head and wings of an eagle.  In the world of MSWM, the Griffin looks like a beginners class yawn.  Lets take a look:

Missile Tracking:  +5%  Lowest of the pack for all weapons class with tracking boost

Speed: +8%:  Lowest of the pack for all weapons class witha speed boost.

To make matters worse, the tired old F-4 skin is drudged out again, this time with a questionable paint job.  So why would anyone want to spend 50 of your hard earned coins for an X-15 Griffin?  I have no idea.  Maybe some of you readers might find a reason.

The Griffin has been added to the Comparison Guide  and also to the Fleet at a Glance - check it out!
Posted by MetalStorm Forever! on Monday, September 24, 2012 34 comments: Links to this post 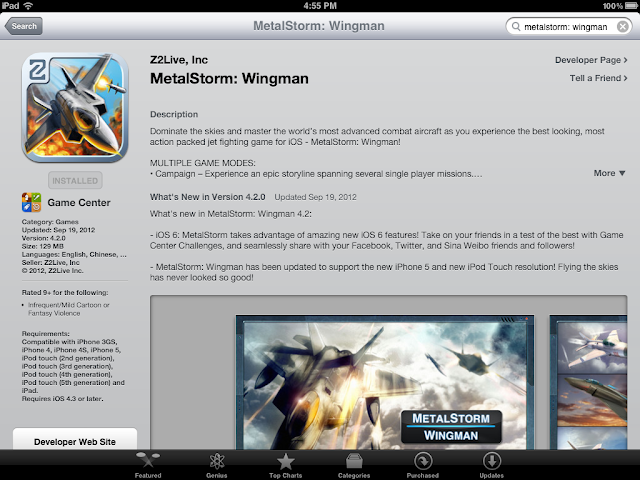 MSWM 4.2 has been released.  This version doesn't have too much to get excited about.  Updates for IOS 6 compatibility and restored compatibility with Facebook/Twitter & Sina Weibo (what the hell is that).  I'm sure somebody will chime in and school me on Sina Weibo. ;-)
Posted by MetalStorm Forever! on Wednesday, September 19, 2012 37 comments: Links to this post 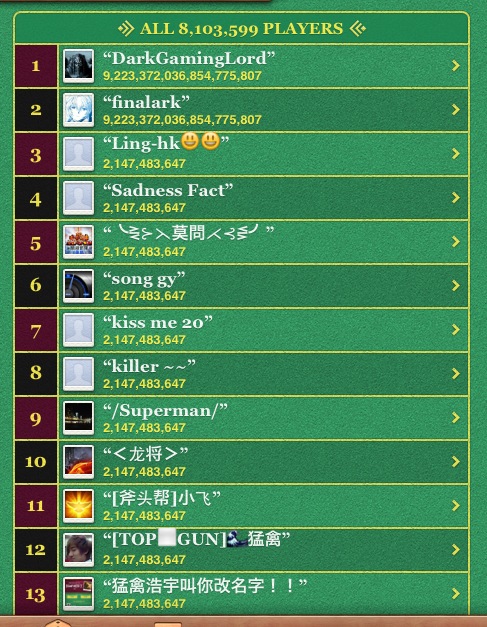 Above you see the leaderboard for number of "Versus Kills" for MSWM.  Lets take a quick look at the math for these scores:

DarkGamingLord and finalark have both posted a rather impressive ~9.2 Quintillion kills.   I don't know too much about math, but that sounds like alot of kills.  I wonder how that works out to kills per minute or kills per second?  Lets do some generous rounding and say that the game has been in existence for 2 years, which equals to about 63 million seconds.  If you do the division, this score equals 146 billion kills per second for every second/minute/day/week over the 2 year period.  Wow, guys, pretty impressive!

Ok, so maybe the first 2 scores are hacks, lets take a look at the next long grouping.  They all are about 2.15 billion kills (quite a step down from 9.2 quintillion - come on guys, your slacking).  Doing the math, these equal 34 kills per second, 24 hours per day, 7 days per week.  I take it back, you guys aren't slackers at all - you're just not as good of cheaters as DarkGamingLord and finalark.

In summary, I give kudos to these pranksters - its a good laugh.  The hall of shame award really belongs to Z2Live or Apple Gamecenter for letting these scores sit there for the past 6+ months without doing anything about them or trying to stop the hacks on this game.

Posted by MetalStorm Forever! on Thursday, September 13, 2012 61 comments: Links to this post 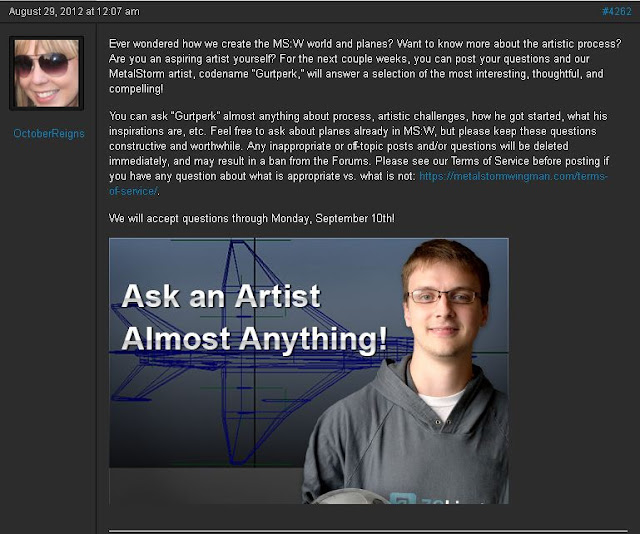 
Not much going on right now in MSWM.  A couple of re-released planes.  They do have a Q&A session going on with the MSWM plane artist (follow link above).  Last that I checked, there were 71 questions and only 5 responses (cmon Gurtperk, are ya THAT busy?).

I think that there is a need for more of these Q&A sessions, they are a good way to let the community know whats going on for this game.  Talking about the plane art is cool, but a Q&A on future upgrades, fixes, measures being taken against hacks, etc... are what most players would REALLY like to talk about, I believe.

We also want to learn more about the moderator of the metalstorm forum, October Reigns.  Heh October, what do you do for Z2?  Don't be shy!


Posted by MetalStorm Forever! on Saturday, September 08, 2012 47 comments: Links to this post