Is everyone seeing this?  Looks like the game has been down for awhile now. 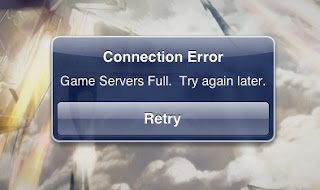 Newer posting below - hate when the power goes out! Does it really take >12 hours to reboot? 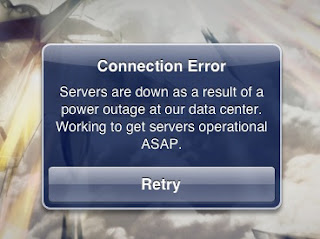 Posted by MetalStorm Forever! on Saturday, June 30, 2012 34 comments: Links to this post


I wanted to talk more about missile avoidance techniques (rather than just keep posting re-run plane releases).  Lately, I've tried a technique for missile avoidance that seems to work pretty good and I thought that I would throw it out there for discussion:

High Speed/No Roll Avoidance:  When under fire, immediately go full throttle and bank hard.  I used to also throw in a roll as the missile gets close but have noticed that NOT rolling sometimes works better.  Maybe rolling decreases speed?  Also have noticed that going directly at your opponent is usually the worst approach (for agility class fighting) since you are relatively motionless from the incoming missiles point-of-view (even if you bank at the last second).

If I really don't want to get hit on the approach to an opponent, I try to go at about a 45 degree (or greater) angle towards them.  This makes my lateral motion with respect to incoming missiles much greater and they seem to miss more often.  I then make a sharp S turn and try to go the opposite 45 degree angle to avoid the 2nd volley of missiles. It takes a little longer to get close and into a circular engagement this way, but at times I've been able to get up close to weapons class planes with coin missiles without getting hit a single time.  (not all the time, but when I nail it, its pretty sweet).  Of note, this works best with a FAST agility class plane.

Also, another tip I've been trying is firing from a slightly nose up position at close range seems to be more successful than level or nose down.  (with your opponent slightly beneath you when in close range).

For flying weapons class,  if you ARE going to get hit, remember to roll right before impact as weapons class has 40% reduction in damage when hit during a maneuver.

Any other innovative techniques for missile avoidance?  Lets hear them. Can never get enough tips and skills in this area!
Posted by MetalStorm Forever! on Wednesday, June 27, 2012 94 comments: Links to this post