Juggernaut Arrives - but with a twist


Well, Maverick and Goose are not going to be singing Great Balls of Fire tonight.  It looks like the stats on the Juggernaut has been tweaked from the leaked version (aka, watered down).  See picts below

The "New" Juggernaut ( still a reskinned Bobcat modeled after the F-14 Tomcat of Top Gun lore) is no longer the crowned official "STEALTH" plane - it now shares this title with the Arbiter at +12%.  A step in the direction of boring, in my opinion, with 2 of the performance levels downgraded.  Not sure why Z2 doesn't want to provide a true stealth plane, but the released Juggernaut dropped 2% from the leaked version.  Still, being tied for most stealthy, they should have chosen an F-22 or F-35 skin or crank out a F-117 skin and really make it interesting.

The Juggernaut still has the best agility of any defense class plane, but only slightly better than the Dragon (although still not very agile compared to agility class, but closer to weapons class levels).

Juggernaut maintains BEST IN FLEET and BEST EVER RELEASED for Armor - but with no extra regeneration, that isn't too much of a thrill.   Lock speed has been bumped up a bit from the leaked version.  It was hard for me to get too excited about the leaked version of this plane.  It is even HARDER for me to get excited about this watered down version.  Maybe the armor would be worth while if there is a new, incredibly hard campaign (doubtful).   As said before, my preference would be to jack the stealth up even higher and make a REAL stealth plane.  Overall Juggernaut is decent, but not ground breaking and definitely not worth 205 coins. 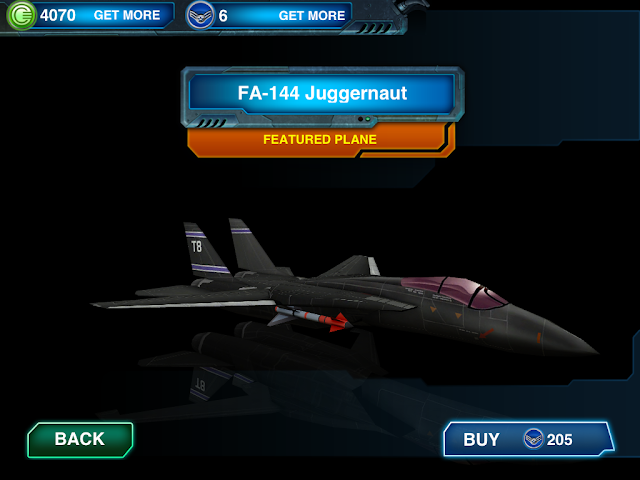