MetalStorm: Aces Review
As most of you know, Z2Live has created a new game in the MetalStorm lineup titled MetalStorm: Aces.   Last that I checked, this game still had limited release only to Canada and the Netherlands (most likely to work out any early bugs and updates to a limited audience).  I’ve made an earlier post on how to trick iTunes into letting you download this if you would like to try the game for yourself. 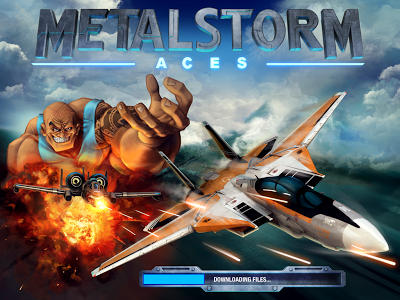 Overall, I’ve been reluctant to review this game, mainly because it seems like it is not quite complete yet.  There have been several major updates and fixes made to it since its limited release.  Z2 is taking an active role in soliciting feedback from fan groups on facebook which is commendable and it is evident that they really are trying to listen to the users to improve the game.  However the game has been out for awhile now, so I’ve decided to post this review for now and will make updates as the game matures.

Cost:  Just like Metalstorm Wingman, Metalstorm Aces (MSA from now on) takes the fremium approach where the app is free but to advance significantly in the game you will need to pay for better planes and upgrades which can add up to a fairly large amount of money as you progress.

Graphics:  I hate to say it but I find the graphics in MSA to be disappointing.  The terrain detail, shadowing, texturing, weather, sky, etc.  all seem to be less than you’d expect for a newly released fighting sim game.  Especially the shadowing and texturing.  In my opinion, the game takes on the look of a comic book, a cartoon or an old Nintendo console game rather than a cutting edge iOS game.  Perhaps Z2 is focusing more on game play rather than graphics, which would be fine if the game play is good, but I don’t think that is the case here.  They have thrown in some swimming sharks in the water and a few other touches, but there really was nothing in the graphics that I could find that was impressive or cutting edge.  It almost looks like they’ve let some of their developers from their other games, Trade Nations/Battle Nations do the coding here.  Those games also have basic graphics but have excelled on their strategy and game play aspects.
Graphics Verdict:  Disappointing

...but take a look and judge for for yourself: 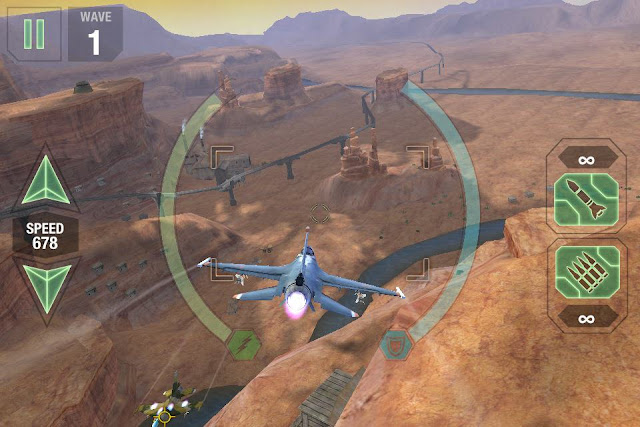 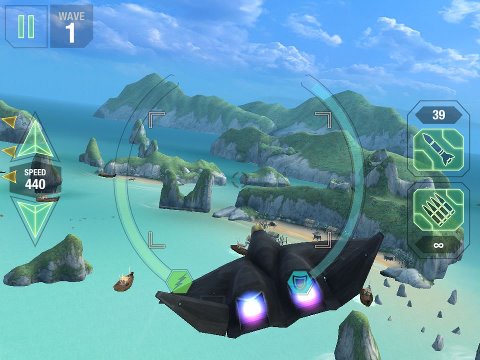 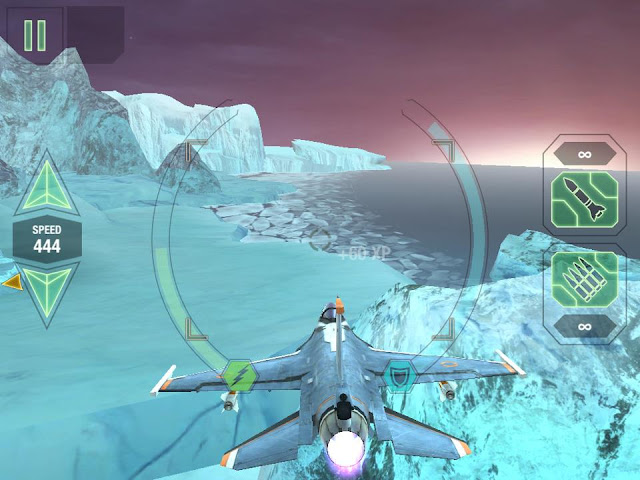 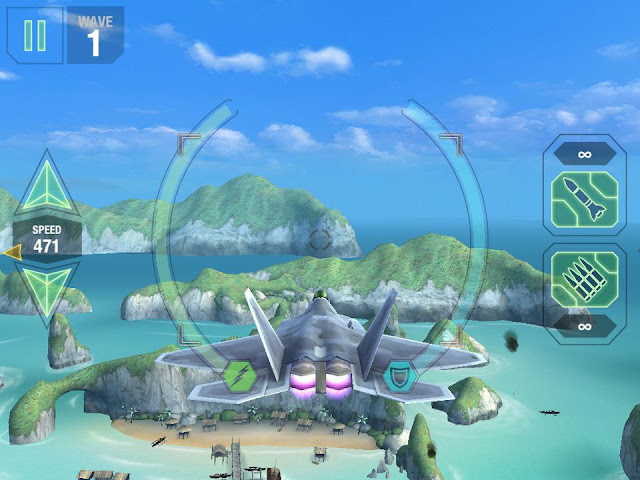 Game Modes:
MSA has followed the lead of MSWM and has basically 3 game modes:
That’s it.  No new game types. Just like MSWM.  Nothing new.

Flight Controls:
No surprises here.  Same flying controls as MSWM including screen swipes for rolls and flips.  Z2 HAS made major changes to the Heads-Up-Display, showing energy, damage and other info in a more tight package merged towards the center of the screen.


Plane Types and Specs:
MSA has an assortment of planes, as you would expect.  You unlock the better planes as you advance levels, just like in MSWM.  They are your standard fare and will all look pretty familiar if you play MSWM although some of the paint jobs and colors have been jazzed up and are well done.
The plane rating system has been completely revamped from MSWM.  In general, the performance parameters are slightly simpler.  Each plane has various types of ratings such as Armor, Speed, Cannon Damage, Agility, Missile Damage, Missile Lock Zone… but it appears that there are only 15 different plane performance specs along with a summary of your upgrades (compared to about 25 specs for MSWM).  It is still fairly complex to tell which planes are best, as in MSWM and would take a bit of time to rate them all in a similar manner as MSWM.    Of note, there are no classes of planes in MSA such as Weapons/Agility/Defense class. 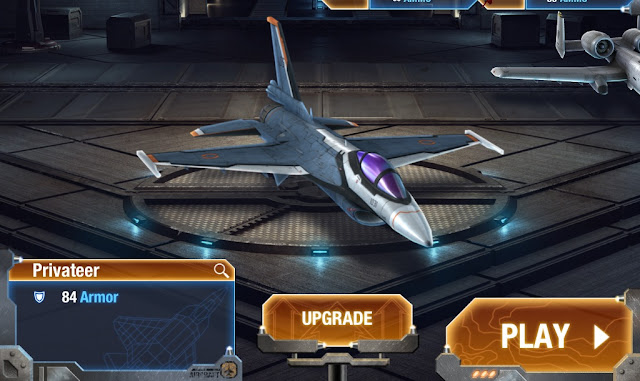 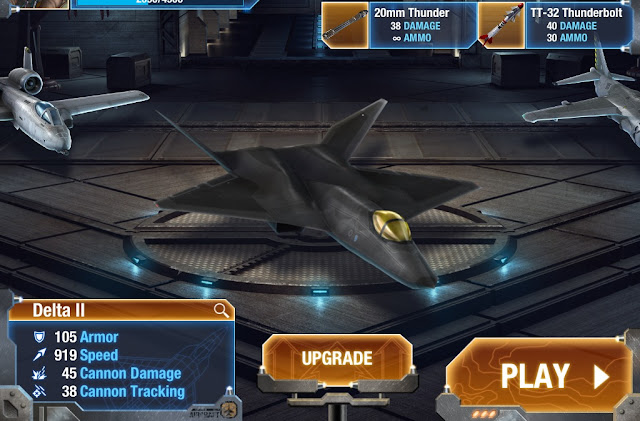 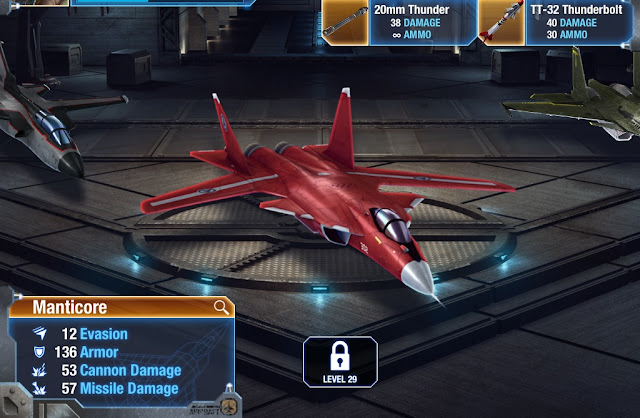 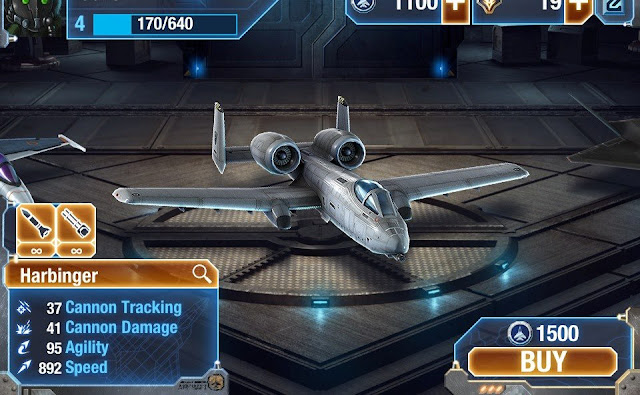 Currency:
MSWM has credits and coins.  MSA has Credits and “Insignias”.  LOL – what was wrong with just calling them coins? Planes and upgrades cost Insignias if you want to accelerate or costs credits as you reach certain levels.  So far, there are no offers for free Insignias by Tapjoy – maybe that is still in the works.  Weapons appear to only cost credits.  Example: If I want to buy the best missiles (the TT-42 Thunderbolts), they cost 2000 credits for 50.

Weapons Types and Specs:
As mentioned, you have an assortment of cannons and missiles to pick from.  The BUILD time is unbelievable long for some of these (8 hours for the best missiles, 5 minutes for the second to bottom missiles).  I did buy some of the best missiles (TT-42) and (8 hours later) tried them out – they did seem pretty lethal (beat my opponent 5-0).

There is one word that best describes the MSA upgrade system:  Complicated.  You can upgrade 5
different aspects of your plane:  Missile System, Cannon System, Engine System, Fuselage System and Module System.  Each of these systems have various upgrades that you can make as you advance levels.  You can also remove an upgrade and reinstall a better upgrade as you move up levels, however you cannot transfer upgrades to other planes, just like in MSWM. Most upgrades cost Insignias and they take time to “build”. 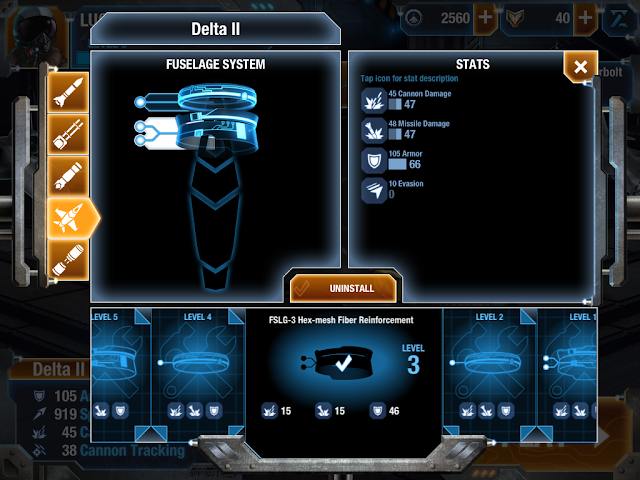 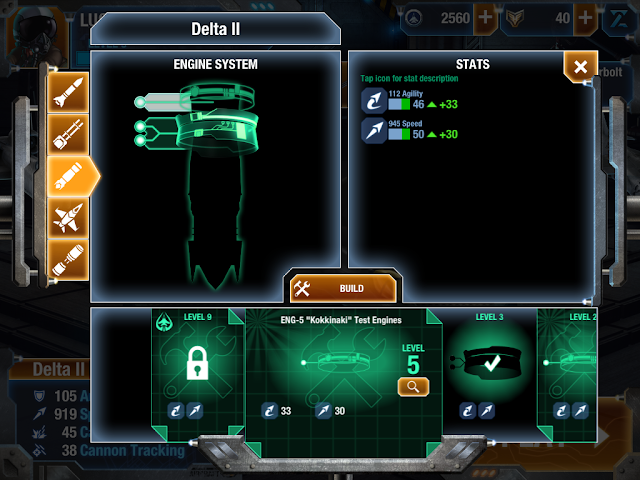 Dogfighting and Overall Game Play:
For Metalstorm Wingman, the 1 vs 1 dogfighting is what makes the game great.  Sky Gamblers is kicking its butt in pretty much everything else, but for 1 vs 1 dogfighting, MSWM still offers the best and most exciting experience in my opinion.  So needless to say, I had high expectations when playing VS mode in MSA.  I have to say that I’ve been disappointed.  Control, in general, seems a little sluggish.  The circling physics are just ok, the missile locking seems slow and cumbersome and entry grade aircraft, in general, all seem to suck.  I’ve heard that once you move up to the more advanced aircraft that the experience improves, but do I really want to pay the money to find out??  My advice to Z2 would be to make some half way decent entry level aircraft in the game to get players involved in the game.  I just don’t feel like I’ve enjoyed the game enough to invest the substantial amount of time to reach some of the higher levels or start shelling out $$ for better planes and upgrades quickly.

Also, the playing field in the game is pretty small – if you stray too far from the main area, you start getting a warning.  If you continue to stray, you blow up!


Overall Verdict:
As you can see, I am not a big fan of Metalstorm Aces.  I feel that Z2 has lost the mojo of Wingman.  Metalstorm Aces is just OK.  They really are not offering anything new here to differentiate this game from the competition.

It seems to me that Z2 is trying to mix a jet fighter sim game with a strategy/resource/city building type of game where you build things and wait for them to get constructed....   I think that there are 2 very different mindsets with gamers.  Jet fighting sim gamers do not want to wait for stuff to get built, they just want to dogfight, shoot at opponents and blow up stuff for some diversionary relief.  Strategy gamers slowly want to build large cities, gather resources, etc...  I just don't think waiting for 8 hours for an upgrade or better missiles is something that dogfighters will want to do.  Anyway, thats my opinion, lets hear yours!  Comment away!

Of note, if you ARE a fan of MSA, there is a great Facebook page out there that you may want to join and check out.  It is located at:  http://www.facebook.com/groups/metalstormaces/

MISCELLANEOUS TOPICS:
Z2Live - Who Are They?
Better Planes vs. Better Game?
Sky Gambler Air Supremacy Review
Version 4.1.2 Released
How should MSWM be improved?
Lets hear it from the cheaters