Z2 has launched Metalstorm Online 5.0 as of  this past friday.  At first glance, it looks like there are several fairly big changes.

1.  Multiplayer matchmaking is supposedly improved.  From the looks of Z2s facebook page, the matchmaking is off to a rough start with many players waiting ... and waiting...   Hopefully there really is some improvement here once they work out the initial issues that they're having. From what I've read in some of the forums, this should be a big improvement in removing most of the hackers in this game!  They have switched to a new server which may cause auto-match waiting delays until things settle.  This morning I had to try a few times but eventually got a vs match so maybe it is improving.

2.  Boosts have been removed.    I didn't see the problem with boosts - added a little variation to the game, but alot of players didn't like them.  They are no more! 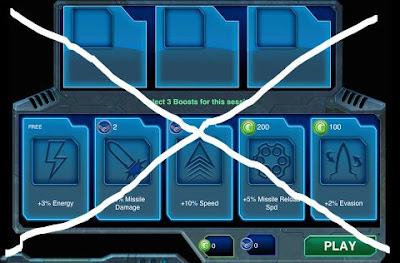 3.  New Currency.  "Medals" have been added.   Oh great, now we get to keep track of credits, coins and medals.

Now I'm sure that the use of "medals" will enhance the playing experience of the game right??   Doubtful.  At first glance, it appears that all upgrades are now credit and medal driven which could be good since you can earn medals quicker than coins.  But the amount of medals needed for the upper level upgrades look very excessive.  See the following info from one reader (thanks for the post!):

On the good side, all you have to worry now is to save blue coins just to buy new planes (and/or buy coin missiles meh).

Places to find medals:
Campaign - 10 medals per stage (only tested the first two. I received no medals when I didn't complete the three missions for the stage)

Versus - none, or 1-15 medals; 5 medals/game on average(?). This is based on winning all my matches and I usually received them every 3-4 matches with different opponents.

Survival - the best place to collect medals, esp. if you can reach wave 20.
When I reach wave 20, I usually gain 35 medals on average at 80% chance (sometimes it doesn't reward you). So far, I've experimented and received 15-20 medals (similarly around 80% chance) when I gave up sometime in between 13-19 waves.

4.  Additional bug fixes, crash fixes, stability and graphics improvements ...   I hate when developers add this line (which is pervasive).  It is just lazy.  Give a few examples as to what your talking about here.   At least list one example of what bug you fixed, what crash situation you fixed, what stability issue that you fixed, what graphic improvement that you made.  Else don't mention it at all.

Overall, version 5.0 does not get me very excited.  I find it a bit discouraging that Z2 again is looking at new ways to fleece its players.  Getting rid of hackers is great and long overdue, don't get me wrong, but where are the cool new capabilities?  New campaigns?

Lets hear from you guys - Are you seeing less hackers in vs matches?  Are there bright spots to version 5.0 that I'm missing?