Plane of the Day: The Smokin Fast F-106 Thresher

Next up for review is the F-106 Thresher.   Modeled after the F-22 Raptor, this agility class plane is one friggin blazing fast mofo.  Flying a fully upgraded Thresher for the first time is kinda like jumping on the back of a pissed off hypersonic tiger.  It is definitely hard to control this speed demon and will test your reflexes to the max.  This plane is one of the best agility class planes in the fleet.

As you can see, most of the tech upgrades are speed, acceleration and agility related.  This plane has the armor of a hummingbird and is easily destroyed even with the armor upgrades.  One nice upgrade, however, is the 3% armor regeneration– its not much (nothing compared to a green eagle) but it will allow your health to slowly creep upward if you manage to stay alive for long stretches. 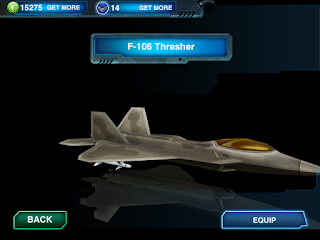 If you have a fully upgraded Thresher, you will be capable of taking on anyone out there.  You will be fast enough to outmaneuver even highly ranked players IF you can learn to control that speed.  I have been able to defeat opponents with double my skill rating with the Thresher.  On the other hand, I’ve also been blown up by opponents with half my skill ratings if I get careless.
On the down side, it is hard to score a high number of kills with a Thresher (at least for me).  The Hawken is much more of a brute for laying on the hurt and scoring 8 or 9 kills.  With my Thresher, I usually don’t get near that many kills, even on easier opponents since I am usually peppering them with Cannon fire during high speed passes.  Of note, I never use a Thresher in campaign or survivor mode – it just doesn’t have the armor.

Also, as with all agility class planes, this plane shines best in tight quarters and close combat – you can almost always catch up to your opponent if you are circling each other and will tend to use your cannons more as you get quick shots and chances to rattle the enemy with your cannons little by little until he finally goes boom.   If you play up against another Thresher or another agility class plane, get ready for a dizzyingly fast battle.

The Thresher goes for 54,000 credits (at least when I got it).  It is the second most expensive plane out there, I believe, second only to the Hawken (not counting specialty planes).
I really enjoy the Thresher and fly it when I am in the mood for a finesse battle with lots of cannon fire and maneuvering – it really provides the thrill of the dogfight and is a great fighter!
Posted by MetalStorm Forever! on Tuesday, January 24, 2012